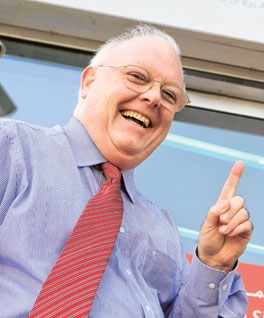 An interview with collector Graham Honeybill, inspiration for Burmese Silver from the Colonial Period

Graham Honeybill has been a banker for all his adult life. He has also been a collector. He has collected in several important areas. One, Burmese silver, is now the subject a fine new book by well-known curator and researcher Alexandra Green, the Henry Ginsburg Curator for Southeast Asian Art at the British Museum and a well-known writer and researcher on Burmese art history. The book is a welcome re-interpretation of the field of Burmese silver, and challenges many preconceived notions around the topic, using Graham’s splendid collection as a pretext.

Graham speaks exclusively about his book and his collecting with WorldArtNow.

Q: People collect for all sorts of reasons – but how did you get your start as a collector?

I blame my mother. She started it all. She loved antiques or should I say anything in which she saw beauty. She loved to trawl though antique shops in North Wales looking for that little treasure, or through junk shops hoping to find that piece overlooked on the back shelf. Inevitably she dragged me along with her. I developed an interest in silver pieces at a price I could afford, and sterling silver sugar tongs fitted the bill perfectly. Overlooked, tarnished, dirty and unwanted they might have been, but they were affordable. Cleaned and polished, they were passed on to the town antiques dealer in bundles of ten for onward sale to the London trade. I received credit which went on Staffordshire portrait figures and luster jugs. I became a small cog in a supply chain, but I had been well and truly bitten by the collecting bug.

Q: And as an adult, what route did your collecting take?

Well, I worked for a UK bank, and I was quite keen on the idea of working overseas. So when, on the back page of The Bankers Magazine, an advert appeared which said ‘Go East Young Man’, I took it quite literally, and off l went. My collecting interests generally followed the countries in which I worked thereafter.

In the Middle East, there was some nice tribal jewellery and interesting silver daggers. I collected these but the scope initially seemed somewhat limited in terms of form and design. Two years later, I was in Brunei, enjoying my introduction to Chinese silver, both export and manufactured locally by local Chinese. I collect silver because I like it. Some pieces are forever special, such as a Malay circular silver tobacco container with a silver belt hook that I bought from a fruit fruit seller on the padang in Brunei for B$15!! The journey to building a good collection is like a long piece of string with knots along it representing those special finds or pieces.

A couple of tours later, I was in Oman and, as the only bachelor (I had yet to marry), I was sent to the outlying branches as required. What a hardship! This was a time of change, and the local ladies were exchanging their beautifully crafted silver jewellery for cheap Pakistani gold. I was lucky to be able to buy some excellent pieces by giving a better price than the local silversmith was paying. It was also an experience bargaining with the Jebali ladies: they were tough!

It was in Sur, a fishing village in northeast Oman, that I found a beautiful silver powder horn complete with the leather neckband. A dried-fish trader had mentioned he had some silver to sell, and I met him in the back room of his warehouse. It was August, and the temperature was well over 50 Celsius. He brought forward an old gunny sack holding a few boxes, bits of women’s jewellery, broken daggers, some scrap silver and half a dried fish. In the middle of these was the powder horn. Three hours later, after bargaining for each piece, the powder horn (described as a woman’s ornament) was mine for OR10. What a memory!

I think this is so much a part of collecting – each item represents so much more than what it is – it is a memory, a record of what I was doing at the time: I can track the course of my life through my collection. In some respects, a collection becomes something of a diary.

The next tour took me to Hong Kong, where I discovered the joy of an afternoon stroll down Hollywood Road with the inevitable stop at Honeychurch Antiques and their selection of Chinese, Cambodian and Laotian silver boxes and animals. The collection grew.

Q: And what about Burmese silver? This became the cornerstone of your collecting. When was your interest on this area ignited?

I came late to Burmese silver. I don’t know why. Perhaps it was that there were so few examples to see at the dealers’ shops I frequented. Things changed when I started to visit two dealers, Genevieve Bernis at Mata-Hari Antiques in Singapore and Michael Backman at Michael Backman Ltd in London. I purchased a number of items from these two dealers over the years, and I shall always be grateful for their advice and guidance. One piece of advice that I was given a number of years ago was to find a dealer that you trusted (and that is a two-way street) and stick with him or her. That is what I did with Genevieve and Michael, and I am happy that our professional relationship has grown into friendship.

Q: Why publish a book on Burmese silver?

When I was collecting it, I couldn’t find a publication that would educate me on the subject or assist with silver selection. Like all collectors, I recognize that I only hold pieces in trust for the next owner. One day my collection will be dispersed, but this book will remain as a memory, serving as a guide to new collectors who have yet to discover the beauty of Burmese silver. The silver is mine. That was the easy part! The beautiful photographs are the work of Richard Valencia to whom I am very grateful. And then there is the wonderful text by Alexandra Green. Alexandra is a researcher on Burma with longstanding experience in working on projects relating to Burma and Southeast Asia. A lot of hard work has gone into this book. I know in the beginning both Alexandra and I underestimated the work involved, but the project is now completed, and I congratulate Alexandra on producing a fine volume, one which, I believe, will become a key reference on the subject.

Buy direct from the London-based publisher Paul Holberton Publishing, or via Amazon.